It's nestled between a bunch of mountains in the far north. The streets are lined by trees and surrounded by canals. It's even pretty chilly in the morning! (Though Thailand's extreme heat rears it's amazing/oppressive head come afternoon)

I've only been to one other real city in Thailand (Bangkok) but by comparison, Chiang Mai seemed much more chilled out and relaxed. Sort of a New York - LA difference.

As you might expect, much of my time in Chiang Mai was spent relaxing (as with much of my time in Thailand in general). I got a whole lot of reading and coding done. EVERY SINGLE NIGHT I went to the same noodle soup street vendor, for 35 baht I was in heaven.

I did three things of note however.

The first was I rented a motorbike for a day and rode it up into the mountains. There I found Chiang Mai's most famous temple: Wat Phrathat Doi Suthep. It was absolutely beautiful and provided wonderful views of the city from above, that of course did not translate at all to film. To reach Wat Phrathat Doi Suthep you have to ride up the mountains about 25km and then walk up 300+ steps. That doesn't sound like too much, but when it's 95deg with 90% humidity it can be a bit tiring.

After visiting the temple I continued up the mountain on my motorbike and found myself in a village of a Khmer hill tribe. It was pretty interesting to find myself in a village built into the side of a mountain, and the people there were very friendly and welcoming. They even showed me a community garden that has some opium poppys growing in it. 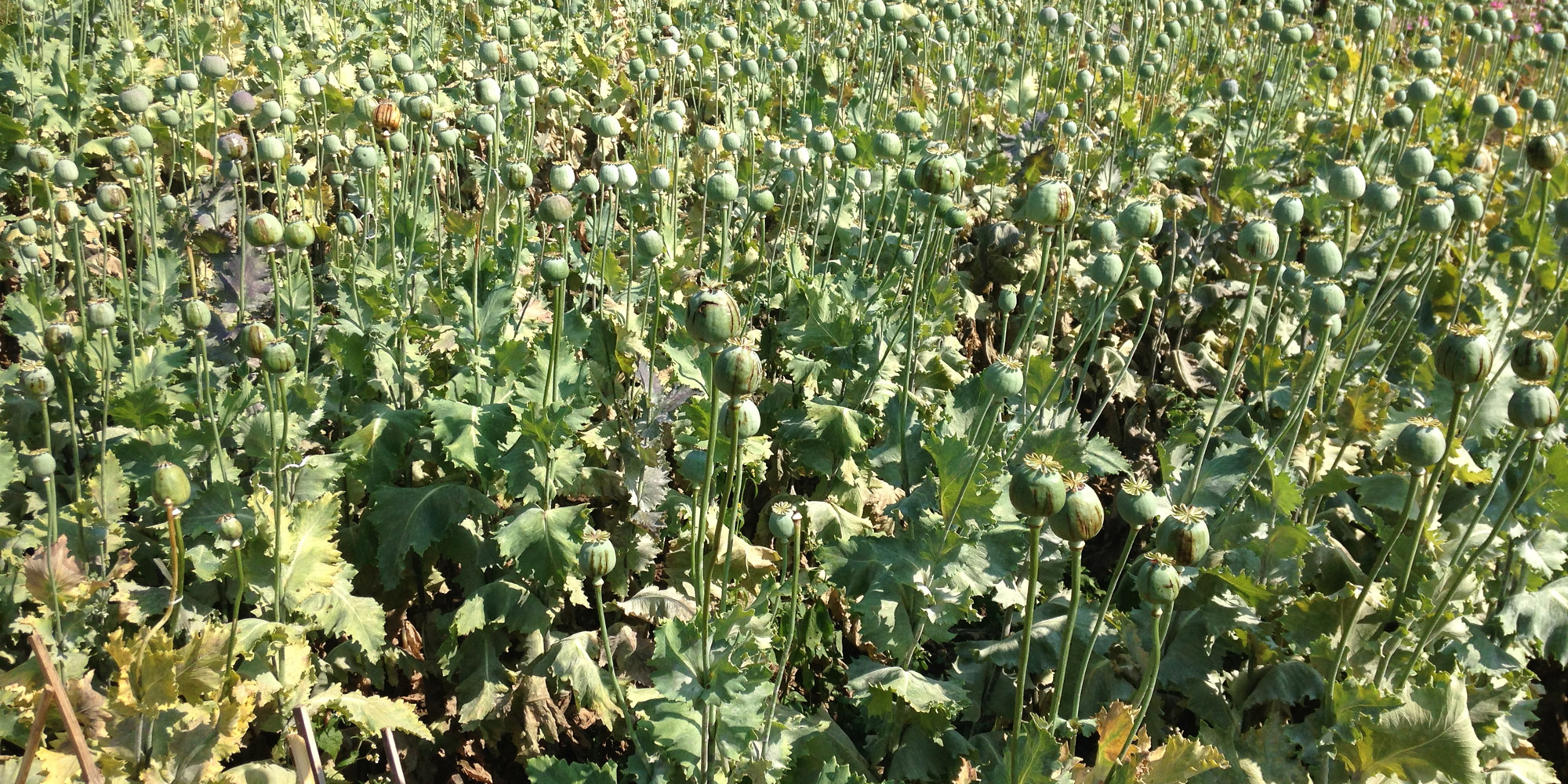 Secondly, I got my teeth cleaned at a dentist. Thailand is well known as a medical tourism destination and dentists are no exception. For $20 they'll pick you up from your hostel, clean your teeth with an efficiency and thoroughness that you can only dream about in the US, and take you back. There was no less than 5 people in the room with me, helping clean my teeth, and the whole process only took 30 minutes, including driving time. My teeth have never felt so clean.

The final thing of note that I did was act as an elephant-caretaker-in-training for a day at Baanchan Elephant park. If you didn't know already, elephants are awesome. All of the elephants at Baanchan are rescued from either bad working conditions or from shows. They picked me up at 6:30 am so we could drive to the park an hour outside of town. It was me, and about 8 couples, mostly English and German. So I was the 17th wheel. The silver lining to this was an elephant all to myself. When we fist arrived we learned a big about elephants and the park itself, then we were given a huge 10kg bag of bananas and sugar cane to feed to the elephants, then they just let us go, free to feed whichever of the 37 elephants we chose. Elephants are hilariously greedy, they'll try to snatch food out of your hands with their trunks and use all sorts of adorable trickery to get you to give in. We found out that most elephants eat between 150-200kg of food a day. That's 300-450lbs! 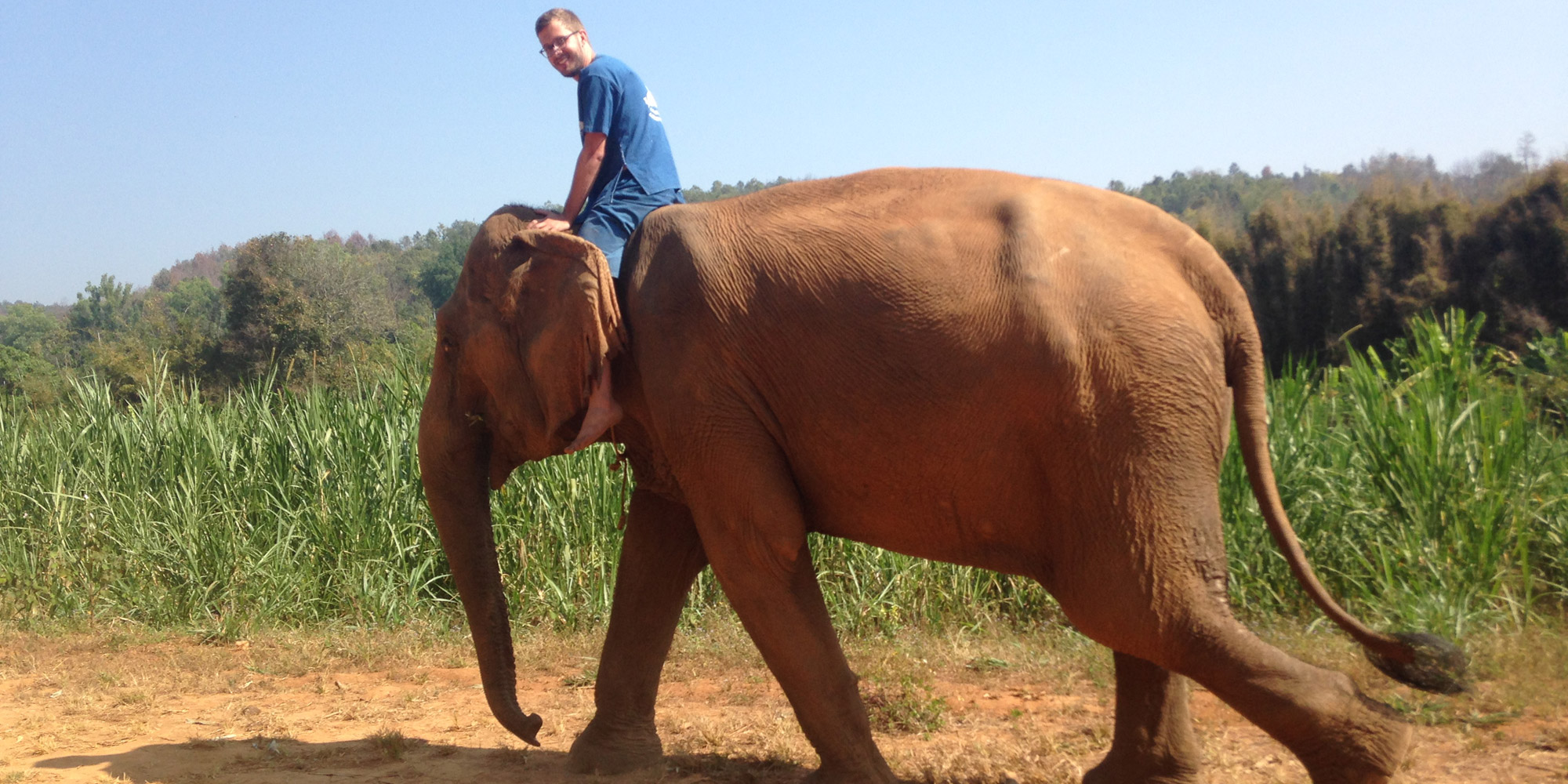 Next we were assigned elephants, I was given Meetong, a 33 year old female (elephants can live to be 70) and the biggest of the group. From the get go, Meetong and I were inseparable. I've always prided myself on my ability to pet animals, and elephants were no exception. We were then taught a few commands, mostly "lie down" and "go forwards" and "stop". We then spent the next few hours riding the elephants through the jungle.

When we stopped to take a break (riding an elephant bare back is rough on the old testicles) I would let Meetong and she would hug me with her trunk. She was very snuggly and I knew all the other couples were jealous of our closeness.

After the trek we took them down to the watering hole to clean them off. Standing on the back of an elephant in 10 foot deep water and scrubbing it with a brush while the elephant uses it's trunk as a snorkel is a pretty surreal experience. Meetong kept spraying me with her trunk and eventually all the elephants and couples ended up in a huge water fight, everyone got soaked. Then we said our goodbyes to the elephants, are some food, and went home. 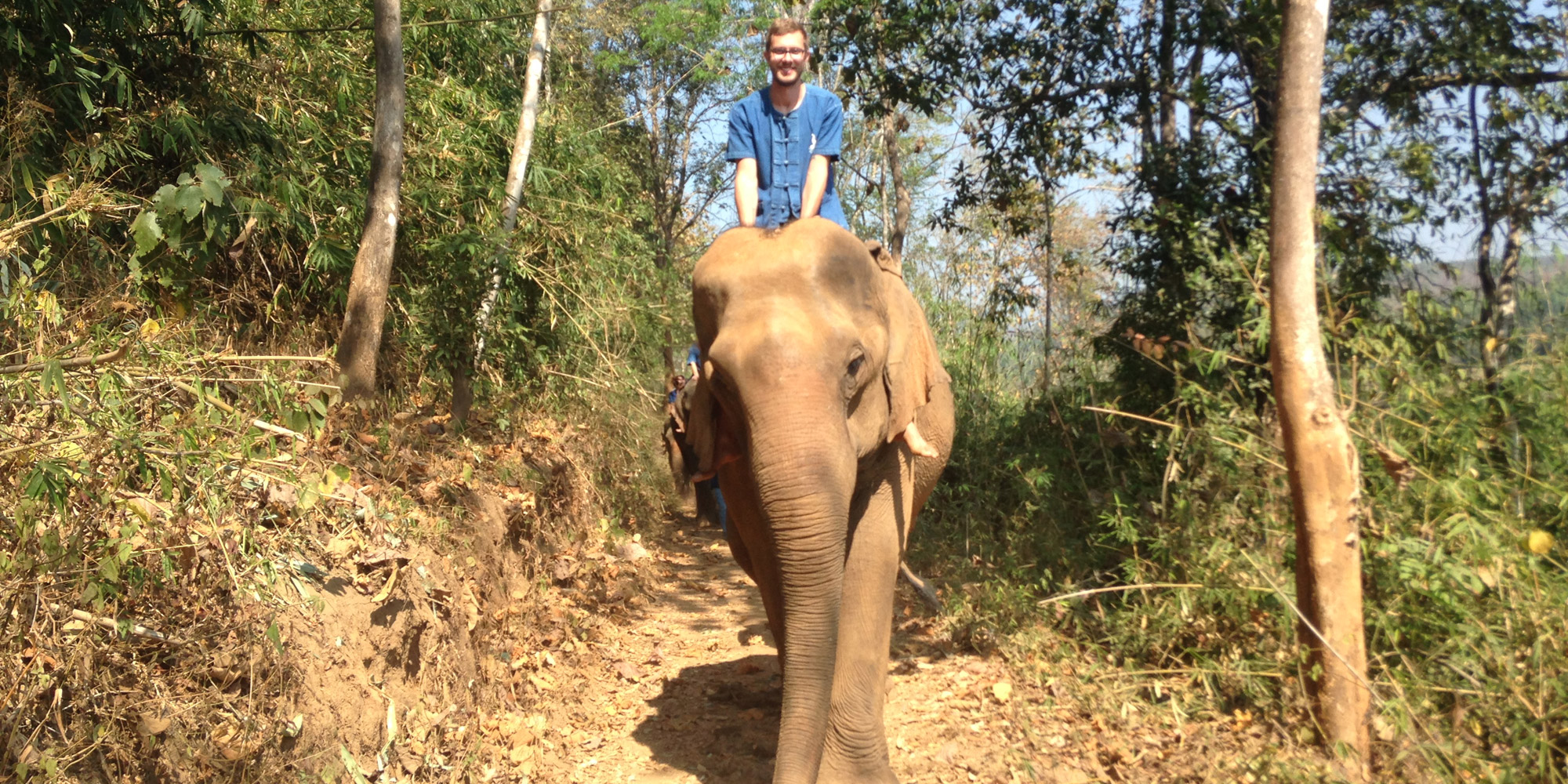 The rest of my time in Chiang Mai was pretty un noteworthy, not because of the city but because I didn't do too much, mostly sleeping, eating, reading and coding. I'm going to miss Thai food more than I would have ever expected.

I took an overnight train to Bangkok and spent my 29th birthday there, wandering and seeing parts of the city I had missed on my first time through. I ate a delicious meal in Bangkok's Chinatown and bought myself a beer. The next morning I woke up early and hopped on a bus bound for Cambodia.